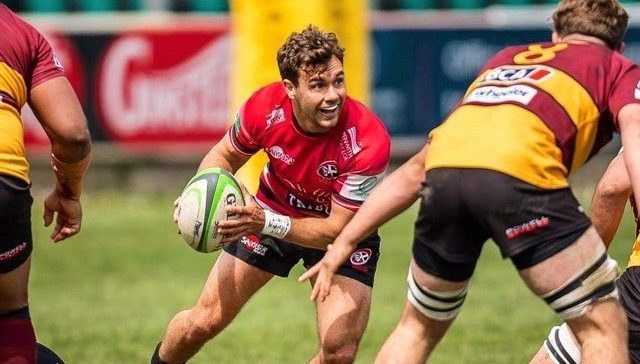 Former Abbey Gate College student Alex Schwarz has played an integral part in the development and success of rugby in North Wales. In his final year at the Abbey Gate College Alex represented Wales Under 18s, gaining caps against Japan, France and Scotland. After his final year he moved to Italy to play for Italian team Rugby Colorno; Alex says, “It was a great experience and we were able to gain promotion in my season there. During my time there I also had the chance to train with Aironi (now named Zebre), a professional team in the Guinness Pro14.”

Upon his return to Wales, Alex signed for Rygbi Gogledd Cymru (RGC), starting in Division One and gaining promotion into the Welsh Championship, “In our first season in the Premiership (2016/17) we finished 4th, which put us through to the semi final of the league playoffs. In that season we also won the Welsh National Cup. Beating Pontypridd to lift the trophy at the Principality Stadium in Cardiff.”

In 2018 Alex signed a professional contract with Cornish Pirates in the English Greene King Championship. In 2021, before the Championship season started, he went on a short term loan to Wasps in the English Premiership, gaining one cap against Leicester Tigers.

Speaking of his time at Abbey Gate College Alex says, “I will be forever grateful to AGC and its staff for supporting me throughout my time there. Particularly in my final year of A levels when I had to travel back and forth to Cardiff three days a week to train. I loved my time at the College and I was delighted to return to see the new sports facilities a couple of years ago.”