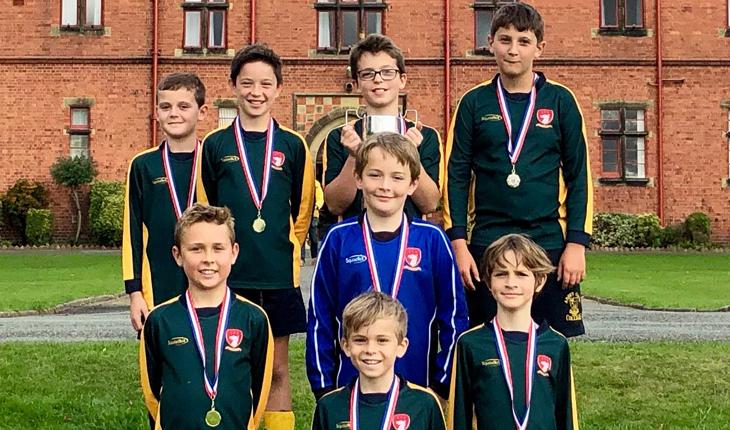 Impressive Display by U11 Football Team Published on 7th October 2019

The U11 football team travelled to Ellesmere College, on Sunday 6 October, to compete in the U11 6-a-side Football Tournament, a tournament that has traditionally been a favourite of Abbey Gate College. Very rarely do we win an opening game to a tournament but this talented group of boys opened their account with a 5-1 rout of Birchfield with all goals coming in the first of two five minute halves. The football was superb and incisive, there was something special in the air!

Next came our local competitors, The Firs. A typically close encounter ensued with us running out victors, just, 1-0. Our final game of the group was against Oswestry. The game allowed us to rest players and the boys were now beginning to enjoy their football, winning 2-0.

Topping the group meant a semi-final versus Shrewsbury. By now we were totally in tune and playing some sublime football and a 4-0 victory would have been more were it not for some excellent goalkeeping from Shrewsbury. So, onward to the final and another game versus The Firs. Surprisingly, but deservedly, we took control from the off reaching half time 3-0 to the good, it was not going to be this easy, was it? Of course not. An excellent spell of attacking football saw The Firs score two quick goals in succession. However, the boys defended from the front and emerged victorious!

15 goals scored, 3 conceded (with Jeremy scoring 11!) this was an impressive display not seen at this level for many years. We are so proud of you boys, well done!