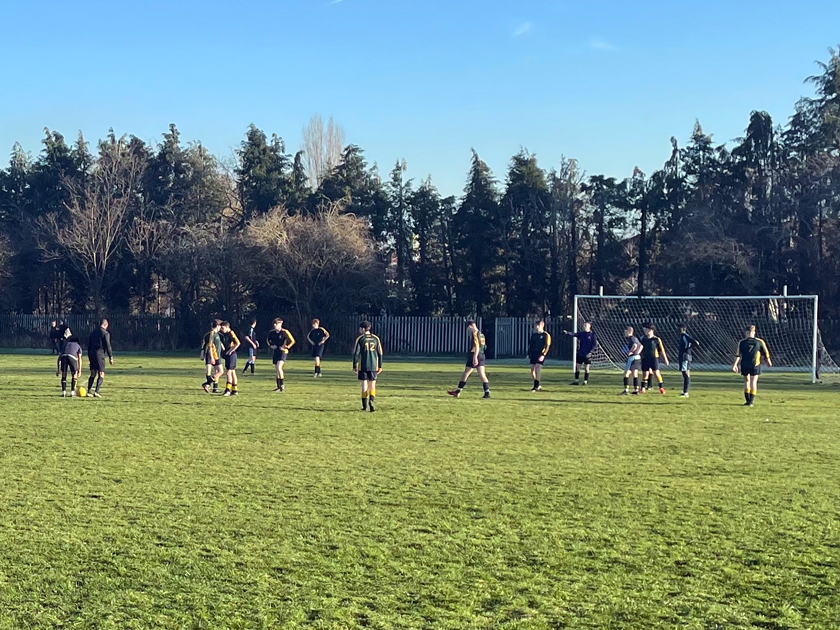 On Friday January 14th the College U16 Football Squad travelled to Oxfordshire to take on St Gregory the Great School in the ESFA Cup Quarter Final qualifying match. In an all action game, the College were knocked out in the cruelest of circumstances on sudden death penalties.

The 11 hour round trip was certainly action packed and full of incident!

The College team dominated early on and Ben N pounced 20 minutes in with a smart finish. The home side found some momentum, aided by a huge long throw weapon and towels aplenty to dry the ball. One of these torpedo throws from St Gregory’s saw the loose ball swept in for the equaliser.

Early in the second half the College were still dominating play and Ben N rebounded his own shot to score before he again flicked in a header for 3-1. The home side responded with a bending free kick before another hopeful free kick looped over the College keeper for a late equaliser.

As fatigue set in, both teams struggled to create clear chances but the home team’s long throw weapon struck again with 3 minutes to go and a loose ball smashed home.

The College squad deserve great credit for driving forward and with the last touch of the game Max W rose to head in a Zac Y corner.

Penalties ensued with the first five ending 4-4 before sudden death penalty kicks decided the tie in favour of the home team.

The Abbey Gate College boys played with excellence, demonstrating a determined and resilient performance and incredible sportsmanship, despite such a disappointing way to lose.